Having recently embarked on a new career for the third time in my working life, I am encouraged by Charles Handy’s latest book The Second Curve — a collection of 16 essays in which the Irish-born social philosopher sets out his vision of how society, organisations and individuals will change over the next 20 years.

“The Western world seems to have gone into retirement mode, settling for a cautious life after the financial scares of the last decade, hoping that the comfortable life we had become used to will soon return if we only keep our nerve. The reality, however, is that we can neither bring back the past nor prolong the present indefinitely. When the world changes around us we have to change as well…”

Handy says many things that work today will not continue to work into the future and argues that now is the time to embark on a ‘Second Curve’. To avoid decline, he believes that societies, organisations and individuals must reinvent themselves. He suggests that the Second Curve is most likely to succeed when it starts before an existing growth phase has peaked. 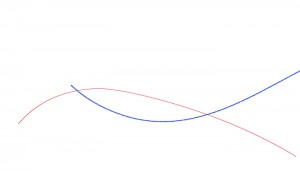 He says that the Second Curve “is our chance to make up for any shortcomings on the first curve, to redeem ourselves and to show that we have learnt …”

Handy is not afraid to be provocative and challenges many prevailing attitudes. For example, he suggests that economic growth is a simplistic goal and favours a broader measurement system that would take into account flaws as well as successes and focuses on ‘enough’ rather than on ‘more’.

“Better not bigger“  is Handy’s mantra. Indeed he goes so far as to suggest dismantling some large organisations into their component parts and he’s certainly no fan of the bonus culture:  “To me it seems demeaning to have to be bribed to do your best in your job.” He blames the priority given to shareholder value in the 1970s for creating a harmful emphasis on short-termism and says that if capitalism is to survive it must be seen to benefit all not just a favoured few.

Handy sees opportunities for individuals who embrace the Second Curve by proactively reinventing their careers before age or ill health force an unwelcome change on them. By embarking on their second (or subsequent) curve before the first curve peaks, he suggests individuals can enjoy longer and more productive working lives. Indeed he predicts that self-employment will become increasingly prevalent as improved life expectancy prolongs careers well past the traditional retirement age.

Thoughtful and thought-provoking The Second Curve is a welcome addition to Handy’s existing work and a good introduction for anyone new to his social philosophy.

[Disclosure: The Second Curve: Thoughts on Reinventing Society by Charles Handy is published by Random House UK/Cornerstone. I received an advance review copy]

We use cookies to ensure that we give you the best experience on our website. If you continue to use this site we will assume that you are happy with it.OkNoPrivacy policy
You can revoke your consent any time using the Revoke consent button.Revoke consent